Have you ever run across a situation where you were trying to debug some code, but you hit a wall when you ran into an object that you don’t own? Happens to me more often than I like. And, before I learned about .NET Reflector, I was stuck using debug.print statements on either side of the object call to figure out what was going on inside.

.NET Reflector changes all that. Need to see the code for an object you don’t own? Crack open any .NET assembly with reflector.exe and disassemble the code. Here the disassembly of a method from a WCF service I wrote recently:

You can even use this tool to disassemble objects in the .NET Framework!

Plus, .NET Reflector includes a Visual Studio add-in that lets you debug into this disassembled code! So, no more debug.print. Just follow the flow of execution right on into that code you don’t own. Who knows, you may even find someone else’s bug in the process of solving your own!

According to IntelliBrains, ReSharper is:

the most intelligent add-in for Visual Studio 2005, 2008 and 2010 that provides a rich set of features to boost individual and team productivity in the world of .NET development.

ReSharper is a Visual Studio add-in that adds over 70 features to the development environment. I linked directly to the feature list on the ReSharper web site, because there are just way too many for me to cover here, and they do a good job of showing you the salient points of each feature. But, I would like to point out a few of my favorite features: (I borrowed the images from the ReSharper web site to save me the time.)

As I type, ReSharper is analyzing my code, looking for several things:

This, to me, is the single most valuable feature of ReSharper. I would not code nearly as fast without it.

ReSharper offers several “Go To” tools that will significantly speed up your navigation of your code:

Here’s a picture of a small subset of the refactoring support in ReSharper:

One particularly interesting one in that list is “Use Base Type where Possible…” which is a very good habit. Using abstract classes and interfaces allows you to break coupling in your code. I could write several blog posts about just this one refactoring. Admittedly, though, my use of the refactorings tends toward smaller scale things like “Extract Method” and “Inline Method”.

Advocates of the agile practice called Test Driven Development (like myself) have long derided Visual Studio for offering to write unit tests for code that already exists, but not offering the opposite feature – generating method stubs from tests that were written before the code existed. ReSharper fills that gap quite nicely:

If you do TDD in Visual Studio, this feature alone will pay for ReSharper. (And, if you’re not doing TDD, why not?)

Here’s a feature I didn’t even know existed until I started writing this article. It’s called “Complete Statement” and it automatically completes the current statement.

When you reach the end of a statement, like this:

Simply press CTRL+SHIFT+Enter and ReSharper completes the statement, and places the insertion point exactly where you’d want it, like this:

I think I’ll be trying that one out later today.

Ever open a file and discover that whoever created it had their tabs set to 2 spaces, making the text too dense and the indentations too shallow for you to quickly grasp the structure of the document? ReSharper can help you there, too. Simply press CTRL+ALT+F to format the file using your preferred format settings.

ReSharper completely replaces the rather limited Visual Studio “Code Snippets” feature with their own Live Templates feature. Here’s an example of their “foreach” template at work:

Notice that ReSharper knew which object you were likely to want to iterate over. Very smart. Very useful. To access the feature, press TAB after typing in the name of a live template, in this case “foreach”.

ReSharper automatically detects NUnit and MSTest-based unit tests in your projects and allows you to run them directly within the Visual Studio user interface. The runner is not perfect – JetBrains doesn’t always quickly add support for new features as they are added to the unit test frameworks. For example, ReSharper 4.5 does not support the NUnit [TestCase] attribute for creating data driven tests. But, I rarely use the [TestCase] attribute when doing TDD tests, which is primarily how I use the unit test runner.

If I still haven’t convinced you to take a look at ReSharper, I recommend taking a look at their website before writing it off completely. There are so many useful features that I didn’t cover here, you’re bound to find half a dozen favorites of your own. Heck, even if you’re already using ReSharper, spending some time on their website will likely show you something you don’t know about the product.

While working on a new WCF front-end for some legacy software today, I wanted to go look at how another team setup the WIX file for their service. So, I fired up a second copy of Visual Studio and began fighting with AccuBridge. Here’s the sequence of events:

It seems to me that the proper solution would be for my source control provider to wait for an explicit command before running off to check the repository for updates. It also seems to me that a plug-in should allow the parent application to close, regardless of what it is trying to do when the end user asks to close the application.

Why these things don’t work this way, I do not know. One thing I do know – it would do wonders for my flow.

Here's another one of those tips that I'm blogging just so that I won't forget it. 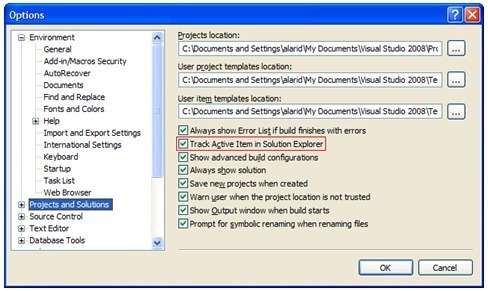 I find this an extremely useful option. It helps me maintain context when I'm jumping from one open file to another while working on a complex problem. It puzzles me as to why the Visual Studio team decided that this option should be off by default. Oh, well. Now we both know how to use it.

Visual Studio just went schizophrenic on me: F5 started running File/Open/File, rather than Debug/Start Debugging; F9 refused to toggle breakpoints; and, none of the other default keyboard shortcuts appeared to be working normally. It took me a while to find the resolution to the problem. So, I'm blogging it for posterity.

In a Visual Studio Command Prompt, enter the following commands:

This command clears out your recent projects list, dumps your RSS feed, and more. It will execute for several seconds (perhaps even a minute), then return control to the command prompt. (Interestingly, the /resetuserdata switch does not appear to be documented – either in the command line help, or on MSDN. I found it on a blog.)

This command starts Visual Studio again, and allows you to choose your development environment defaults.